Compared to the West, the search engine landscape in China is ever-changing. The emergence of Qihoo as a major player has been astonishing; with recent figures announced by the CNZZ showing that Qihoo now has 20% of the Chinese search engine market place-http://engine.data.cnzz.com

This rapid rise seems to have been at market-leader Baidu’s expense, with their market share declining by 10% over the last 12 months.

Qihoo has managed to impact this market quickly because of their sizable foothold in the web security market in China and their 360-branded browser, which is the default setting for their security software.

Having spoken to a number of leading digital agencies in China this week, Qihoo has become an immensely attractive proposition for advertisers in China because of its increasing reach and because of the lower cost of clicks they offer, compared to giant Baidu.

Can Qihoo sustain this growth? – It is difficult to see this happening with Baidu’s might and ever developing offering, particularly on mobile. Baidu, like it’s western counterpart, Google, never stands still, and has too much at stake to see its’ market share continue to be eroded by this contender.

Where does all of this leave Google?
Precisely nowhere, with a market share of less than 2%. Google, it would appear, has lost this particular battle.

A view from the Bund, Shanghai, this week:- 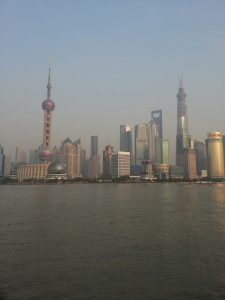